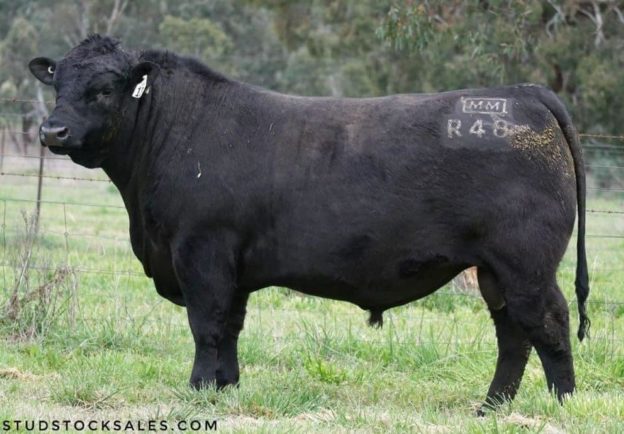 Barely six months into their tenure as the new owner/operators of Whangara Angus, the purchase of this $240,000 second-top priced sire, via a three stud syndicate, marks a milestone achievement. Further, it sets the tone for Tom and Andrew’s commitment to securing the best genetics available to take their operation, and consequently that of their commercial clients, to the next level.

Tom said science backed performance is taking centre stage in terms of their focus for the future – and the influence of REMBRANDT R48 is set to launch them strongly in this direction. “We are really excited by what he will bring to the mix in sound structure and type, whilst backed up by strong performance and a great set of figures.”

The Millah Murrah Angus sale, held on farm near Bathurst NSW, smashed breed and allbreed industry records. Tom said the well-known stud sold all 118 bulls offered for an all-breeds record average of $34,220, turning over just north of $4 million. Their pursuit of quality genetics didn’t stop there this bull sale season, with the Whangara purchasing five other bulls as well as a 50% share in another.

“We secured four top priced bulls from around the country, including one from Te Mania Angus which we purchased in partnership with neighbouring stud, Turihaua Angus. “We are really humbled by the opportunity to work alongside such a prominent, well established East Coast stud, who are well known for structural integrity and consistent type.” He said figures play a key role in their purchase decisions, with EBV accuracies becoming increasingly higher.

“This obviously makes them a far more reliable way of increasing performance and, in turn, the bottom line for commercial farmers.” He said in leaning more on EBVs, they will not compromise on structure, docility, constitution and type.

“We believe you don’t have to sacrifice structure to achieve high performance, and we will prove that with the high quality genetics we have brought into our programme.” Looking to the future, Tom and Andrew are committed to working closely with clients as they build their reputation and results.

“East Coast cows have to work hard all year round and still raise a good calf each season.” He said he knows he’s preaching to the converted when he says calving ease and fertility are essential up here.“The buck doesn’t stop there though.

“The calf that she produces then must have the genetic potential to go on and yield a high quality carcase, which is especially important now with substantial premiums being paid for carcasses that meet the right criteria.”

Tom and Andrew have an ambitious vision for their breeding programme, and they’ve already shown they are willing to do what it takes to realise that.